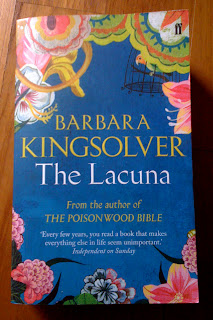 How do you write a history of revolutionary lives and activity in the mid 20th century and sell it to the public? A tough order, certainly, but Barbara Kingsolver nails it with The Lacuna.

The book follows the life of a young man, Harrison Shephard, who finds himself living between the worlds of his Mexican mother and American father. He attends high school in New York during the great depression and the Bonus Army riots, and describes the desperation and anger which filled the streets during those days. He returns to Mexico to serve in the home of Mexico’s most famous artists and communists – Diego Rivera and Frieda Kahlo. Eventually, the household grows to include those homeless revolutionaries-in-exile, Natalia Sedova & Lev Bronstein -  better known as Leon Trotsky. Following a split in the relationship between host and hosted, he serves for several years as one of Trotsky’s secretaries and finally, he finds himself living back in the country of his birth, the USA, where he has to live with his communist past, as well as a few “dirty little secrets” of his own, in the deep dark days of McCarthyism.

Though the person of Harrison Shephard is fictional, the people and social scene was real and is described in incredibly thoroughly researched detail. I cannot conceive of a more accessible account of Trotsky’s life in Mexico. Kingsolver does a fantastic job of describing his attitudes to the various struggles which occur during the years of the book, his relationship with Diego, Natalia and especially Frieda, and ultimately, his murder at the hands of a Stalinist agent.

Binding the whole story together is Harrison's understated but touching narration, and that of his eventual assistant. This medium presents the principle players in a sympathetic light, and brings out a touch of the people behind the legends. It also provides an interesting insight into small town life in the US after the second world war.
All in all, this book is an absolute masterpiece. For people interested in a picture of the lives of some of the key revolutionary players in the Americas in the pre-war period, you’d be hard pressed to find better. Alternately gripping and touching, a must read for all.

Email ThisBlogThis!Share to TwitterShare to FacebookShare to Pinterest
Labels: Culture, Our History