Remembering Our History: Centenary of the Commencement of the Waihi Strike 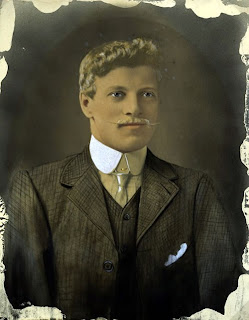 Today is the centenary of the start of the Waihi Strike, an occasion to commemorate one of the most epic struggles of men and women in the history of the working class. On the centenary of Black Tuesday in November we will remember loyal union member Frederick Evans [pictured above], battered to death by a squad of hired thugs and police as they stormed the Waihi miners’ union hall.

On Monday 13th May 1912 a union mass meeting in Waihi voted to send the mining companies a message the next day:

‘members of the Waihi Workers’ Union employed in the mines have ceased work, and will not resume until such time as the Union receives an assurance from the Companies that the disbandment of the recently formed Engine Drivers’ Union is insisted upon by them, and also until all engine-drivers and firemen employed on the field, other than members of the Amalgamated Society of Engineers, become members of this Union. If the Unions demands are not granted before 12 o’clock today all members of the union employed in batteries etc shall cease work.’

The goldfields strike lasted six months, ending in defeat after mass jailings and violence against the miners and their families. New Zealand was changed forever. Down went the dream of revolutionary syndicalism that socialism could be attained through industrial action alone. Politics counted after all. The Union had been confronted by the power of the capitalist state.

‘What does this power mainly consist of? It consists of special bodies of armed men which have prisons, etc., at their command.’ (Lenin, State and Revolution, 1917)

After Waihi, and further state violence and union defeats in 1913, the pendulum in the working class movement swung from industrial to political action. The Labour Party would be founded in 1916, and in 1935 the erstwhile revolutionaries who had thrown themselves into the Waihi struggle would be forming the government. 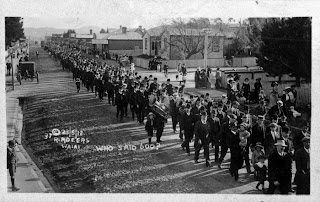 [Strikers and their supporters marching. The caption reads "who said 600?", challenging a number given in the Herald]

But this is running ahead. A little background information is needed to explain why the Waihi miners struck against, apparently, the existence of another union. It must be said straightaway that this engine drivers union was nothing but a scab union instigated by the Waihi Goldmining Company as a stratagem to defeat the Waihi Miners’ and Workers’ Union, which by 1912 had become a powerful threat to profits.

It had not always been so. Under the competitive contract system at Waihi miner was set against miner. Contractor miners bid against each other for work. The system meant that contractors had to drive their hired men hard. The work rate was breakneck, exhausting and dangerous, often times fatally. But the system was splendidly profitable. In 1906 the Waihi Goldmining Company paid out a bonanza of 75% on each share.

In 1907 the Waihi miners’ union had been to the Arbitration Court in an attempt to get the competitive contract system abolished, but Justice Sim ruled in the employers’ favour. The compulsory arbitration system was brought in by the Liberal government in 1894. The chief purpose of the Industrial Conciliation and Arbitration Act was to prevent strikes, but it also gave unions recognition and legal protection. The law bound the unions to Court decisions on terms and condition, or ‘awards’, and outlawed strikes.

The first workers to break out of this stranglehold were coal miners on the West Coast. In 1908 the Blackball miners took their case for increasing their meal break from 15 to 30 minutes to the Arbitration Court but could not get satisfaction from Justice Sim. The miners defied the Court and struck. The mine company conceded and the unionists were fined by the Court, but refused to pay. The Blackball victory was midwife to miners’ unions uniting in a Federation of Miners which declared for “The World’s Wealth for the World’s Workers.” 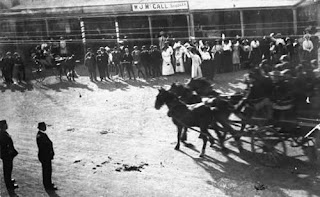 [Strikers jeer scabs being taken in. Note the presence of women in the protests, active in the struggle]

At Waihi successive presidents of the miners’ union found that they could not get regular employment with the mining companies and were forced to move away for work. When Bill Parry was elected in president in 1909 the union overcame the problem of victimisation by making the presidency a salaried position and a Workmen’s Inspector of Mines, as it was legally entitled to do. Parry immediately set about closing stopes until they were timbered and made safe.

The Waihi miners’ joined the miners’ federation in 1909 in which year the organisation was renamed to the Federation of Labour. The Federation grew to include labourers, tramwaymen, watersiders, shearers and flaxmillers. By its 1912 conference it had acquired the Maoriland Worker newspaper, and had 15,000 members. The leaders of the ‘Red Feds’ were members of the revolutionary Socialist Party, but the ideas that came to the fore were the syndicalist ideas of Industrial Unionism, as influenced by people such as British revolutionary socialist Tom Mann and by the Industrial Workers of the World. At the 1912 conference the following magnificent preamble to the rules was adopted:

Between these two classes a struggle must go on until the workers of the world organise as a class, take possession of the earth and the machinery of production, and abolish the wages system.

We find that the centreing of the management of industries into fewer and fewer hands makes the trades unions unable to cope with the ever-growing power of the employing-class. The trade unions foster a state of affairs which allows one set of workers to be pitted against another set of workers in the same industry, thereby helping to defeat one another in wage-wars.

These conditions can be changed and the interest of the working-class upheld only by an organisation formed in such a way that all its members in any one industry, or in all industries, if necessary, cease work whenever a strike or lock-out is on in any department thereof, thus making an injury to one an injury to all.

Instead of the conservative motto: “A fair day’s wages for a fair day’s work,” our watchword is “Abolition of the wages-system.”

It is the historic mission of the working-class to do away with capitalism. The army of production must be organised, not only for everyday struggle with capitalists, but also to carry on production when capitalism has been overthrown. By organising industrially we are forming the structure of the new society within the shell of the old.

The way out of the compulsory arbitration bind was for unions to cancel their registration under the Act. The Waihi union leadership pursued this aim and twice got a majority for cancellation in 1910.  But these votes did not satisfy the registrar as they were not absolute majorities due to non-attendance at meetings. On the third ballot, this time taken at the mine entrance, the required majority was achieved and de-registration was gazetted in May 1911.

Free at last and relying on their own strength and the support of the Federation of Labour, the Waihi miners won in June 1911: a change from the competitive contract to a co-operative contract system, better pay rates, and a right to renegotiate in a year’s time. The level of control exercised by the union was such that it effectively controlled the price of co-operative contracts, in which all in the party shared equally.

It was decided that if a party could not make a satisfactory wage under the price contracted for, the members of the said party would ask the employers for a rise in price. Failing an agreement on such a basis, the Union would fix a price calculated to produce a living wage, and no unionist would take the job for less than the Union price. This rule was strictly and loyally adhered to by the men. One job was held up for four or five months, although the company offered within one-halfpenny per ton of the Union price. (Holland et al, The Tragic Story of the Waihi Strike, 1913)

Never had the Waihi miners had it as good and never had attendance at union meeting been as great. All was put at risk by an arbitrationist union being recognised. All it took for registration under the Act was for a union to have 15 members and there being no other registered union. The registered union would be the official union and the awards of the Arbitration Court would be binding on all workers in that industry or place no matter how unrepresentative the union.

The employers had used this ruse before, in Auckland. They set about it in Waihi amongst the engine drivers and firemen. A hand-picked minority were selected to attend a meeting, but only 13 attended. At a second meeting, on 11th May 1912, a qualifying 25-30 engine-drivers and firemen were cobbled together to form the arbitrationist union. The scene was set for the inevitable clash.

Posted by International Socialists at 17:14

Email ThisBlogThis!Share to TwitterShare to FacebookShare to Pinterest
Labels: Our History, Struggle in Aotearoa, Unions