"Aotearoa is not for sale" - Auckland protests privatisation


[Cory Anderson was one of the thousands who joined the hikoi in Auckland last Saturday. Here is his report. On Friday the hikoi gathers at Wellington, marching from Te Papa from 10am. Students in We Are the University will be marching from VUW at 11.30 to join the main rally] 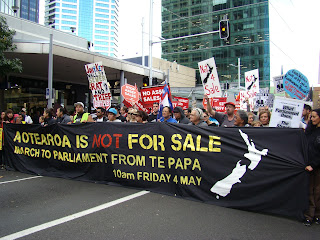 Last Saturday, the movement against asset sales began in earnest as over 4,000 people marched up Queen Street, Auckland to protest National's privatization agenda.  Activists from a wide number of causes and campaigns joined forces, including trade unionists, wharfies, anti-corruption campaigners, occupy Auckland and students.  Perhaps the most militant and noisy section of the demonstration consisted of the residents of the suburb of Glen Innes, who are facing the sharp edge of privatization as they face eviction from their homes, state houses which have been sold to a private developer.  The marchers in Auckland were also joined by more than 300 protestors from Te Tai Tokerau, part of the Mana Movement-led hikoi from Cape Reinga to Wellington, seeking to build support for the movement against asset sales.  During the following days, hundreds more protested in Hamilton and Rotorua as the hikoi headed southwards.

Privatization is National’s response to a serious financial crisis facing the country.  After slashing taxes for corporations and the richest New Zealanders by more than $2 billion in the midst of a severe economic crisis, National sees privatization as a way to inject some cash into the government’s budget.  National is also the party preferred by big business, which hates the idea of sharing their profits by paying for publically-funded services through taxes.  So National and big business see privatization as a way of avoiding the costs associated with economic crisis, while at the same time up their balance sheets.

For the majority of people, privatization is likely to mean reduced access to lower quality services, and a reduced quality of life overall.  The only goal of private businesses is to return a profit to shareholders, and so privatized services will likely be more aggressive in making cuts to services and staff when their bottom line is under threat.  This is the 'efficiency' that National is after.  It is feared that the partial privatization of Solid Energy – the first state-owned enterprise to be put up for partial privatization, will result in power-price rises.  And already privatization has been a failure.  The company Serco, which has run Auckland Central Remand Prison since May last year, has received several fines and warnings from the Department of Corrections for failing to meet standards.  Privatization is also likely to result in greater social inequality.  While the wealthy are always able to afford the best, those on lower incomes will be stuck with cut-price, resource depleted services.  This is the experience of countries such as the United States, which have a largely privatized healthcare system.

The response of the Labour Party to the threat of privatization has been to raise the bogey of “foreign ownership” of New Zealand’s land and assets.  But the issue of foreign vs. domestic ownership is nothing but a racist diversion.  New Zealand-owned companies are no more benign to workers, their communities and the environment than the Australian, American or Chinese owned companies that operate in New Zealand.  Meanwhile, privatisation will disadvantage ordinary people no matter what their ethnic background.  By playing on racist undercurrents in New Zealand society the Labour Party only perpetuates racism and deepens division in society when we need unity the most.  To keep assets in public hands - and roll back the pro-business 'state owned enterpreise' model - and improve our deteriorating services we need to build a movement of the people who use those services and benefit from them.  As Hone Harawira told the Auckland demonstration: “the real power exists outside Parliament”.  From Te Tai Tokerau to the Auckland wharves and the streets of Glenn Innes, to every hospital ward, if workers’ resistance is strong enough it can force any government to back down.

Posted by International Socialists at 21:03

Email ThisBlogThis!Share to TwitterShare to FacebookShare to Pinterest
Labels: Struggle in Aotearoa