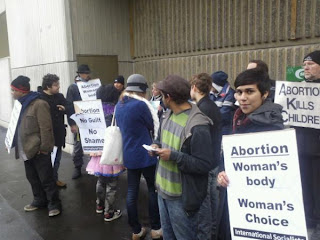 These last weeks there has been a social policy tirade against the rights of women, welfare reforms set to humiliate and degrade women on the domestic purpose benefit, reforms which target working class mothers pushing them back into work after a second child on the DPB.

Last Friday outside the Dunedin Hospital there was a different type of attack on women. A different kind of assail on a women’s right to choose. This was not the first time a group of anti-abortion campaigners stood outside the hospital harassing women and it won’t be the last.

After seeing pictures in the local newspaper of lone counter-protesters to these religious fanatics, an ISO meeting on abortion rights was organised with the highest turn out of attendants of the year. One of the people who attended  was a lone counter-protester who actively encouraged the ISO to get involved. It didn’t take much encouraging and the following morning a group of 10 ISO members and supporters turned up and stood in front of the anti-abortionists blocking the offensive and guilt-tripping signs.

At one point there would have been over 30 people arguing, criticising and ridiculing their conservative justifications for such a blatant attack on women. Most counter-protesters were students angry after walking past this protest every Friday for most of the year. Many had stopped to debate them before but never in such show of force, giving a boost of confidence to the on-going confrontation. In the current political climate where women's rights are under attack it is important to show that we will not lie down to right-wing conservative assaults on the oppressed.

This week there were expensively produced anti-abortion leaflets distributed through campuses across the country. New Zealand's abortion laws still force women to go through too many hoops to access a service that should be freely available on demand.

Our counter-protests continue, and this photo shows today's picket in support of women's rights. Abortion: a woman's right to choose.