Wellington: Aotearoa is Not for Sale 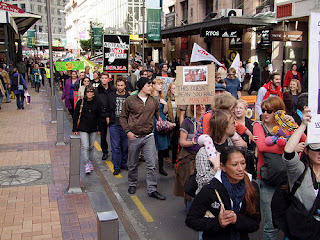 Some 5000 people marched to Parliament against National’s plan to privatize state assets on Friday. The march was vibrant with a broad array of people: meat workers, maritime workers, students and others from major oppositional parties like Mana, Greens, and Labour. Opposition to privatization was the overwhelming theme of the day. We joined the march from VUW - where We Are the University had organised a student feeder march - and, from there to Parliament it was chant after chant against selling state assets that really took off like, “John Key you’ve got mail, our assets are not for sale”.

The broad opposition is at once the hikoi’s strength and its potential weakness. Privatisation is clearly a way to further erode any political control over assets and to put the profits of corporations above the needs of ordinary people. We remember the tragic death of Auckland School teacher Folole Muliaga when Mercury Energy cut off her power as punishment for not paying a measly $168.40 power bill.

The politics of the hikoi will be crucial in the coming weeks. The xenophobia that’s represented by NZ First leader Winston Peters will be absolutely damaging to the campaign. It is a problem that an openly reactionary party like NZ First felt comfortable endorsing the hikoi.

We need more of these kinds of marches to show our opposition to Key’s government and all the attacks that they are carrying out against solo mums on the DPB, and against workers and students. The hikoi itself - and the marches of support in Auckland, Wellington and other centres - are good starts. They show that there is opposition, and that thousands are prepared to take to the streets.

But crucial political issues remain unresolved -- around nationalism and the trap of believing in ‘New Zealand owned’ against foreign capitalists, over Labour’s weak role -- and, for all the scandals of these past weeks, the government stays high in the polls. The challenge for all of us who were on the hikoi is to transform these days of anger into sustained political resistance. 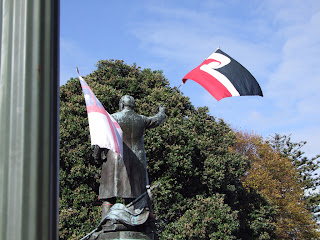 [Photos credit: these photos are from the Tertiary Education Union's flickr stream, which has heaps of other great images from the day.]

Posted by International Socialists at 01:57

Email ThisBlogThis!Share to TwitterShare to FacebookShare to Pinterest
Labels: Struggle in Aotearoa

New comments are not allowed.