Don't lock us out of education: Budget Day 2012 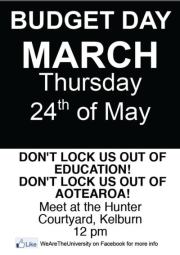 Thursday 24th is the day when the national budget for the coming year will be announced for the first time. Based on what has already been announced and discussed in the media, we can expect the most deeply cutting attacks on workers, beneficiaries and students in decades.

At Victoria University the students' association VUWSA and campaign group "We Are The University" (WATU) are organising a march from Campus down to Parliament under the banner of "Don't lock us out of education" to protest the proposed changes to the student allowance scheme, including limiting access to 4 years and effectively lowering the parental income cap which determines eligibility. These changes will make it even more difficult for those from low income backgrounds to gain qualifications, and make postgraduate work nearly impossible. They are also opposing proposed changes to how courses are funded at government level, which will see money being taken away from arts and humanities courses deemed to be of "low economic impact".

The National government claims to have a mandate to visciously impose auterity measures on workers, beneficiaries and students in New Zealand, while pouring millions of dollars of public money into private coffers. Only by organising collectively can we take a stand against they who would steal from the pockets of the poor to benefit themselves.

We will be meeting tomorrow at 12 noon in the Hunter Courtyard at the centre of the Kelburn Campus. 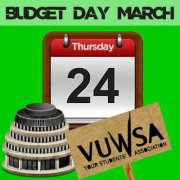 
Posted by International Socialists at 19:11