Today is May 1st, May Day, International Workers’ Day. We send May Day greetings to all workers in struggle here in the Pacific and globally, and re-affirm our commitment to the struggle for a socialist world. May Day commemorates the struggles of the past, and draws our attention to working-class battles today.

The best way to celebrate the traditions of May Day is to join in the struggles of the present. A thousand men and women  from the Meatworkers’ Union are locked-out for standing up for union rights and decent conditions. They're standing strong, and are an inspiration to us all - if you don't fight, you lose!

They need our solidarity – workmates, whanau, community; union hard! Phone 0900 LOCK OUT to send a $5 donation to their fighting fund. Find out more about the struggle here.

We reprint below an article examining the proud internationalist, revolutionary traditions of May Day.

May Day a Celebration of Workers’ Struggle 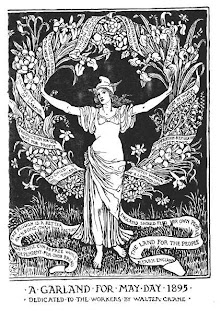 May Day, also known as the International Workers’ Day, commemorates the commitment and sacrifice that millions of people have made in the name of the workers’ movement. It is also a time to raise the demands of today.

On no other day are the proud traditions of the working class celebrated by so many people from so many countries. Since the first demonstration in 1886, the first of May has been celebrated across the world, in times of retreat and of upsurge. The day has played an important role in revolutions from Russia 1917 to Iran 1979.

Rosa Luxemburg, a Polish revolutionary murdered during the German revolution in 1918, wrote of the importance of May Day in 1894:

As long as the struggle of the workers against the bourgeoisie and the ruling class continues, as long as all demands are not met, May Day will be the yearly expression of these demands. And, when better days dawn, when the working class of the world has won its deliverance then too humanity will probably celebrate May Day in honour of the bitter struggles and the many sufferings of the past.

Bitter struggles were being waged elsewhere for the same demand. In America, that beacon of prosperity, twelve, fourteen and even eighteen hour days were common.

The words of the Eight Hours song sum up the basic humanity of the demand:

It was a humanity that the bosses were not going to recognise lightly. In 1884, the Fourth Convention of the American Federation of Labor (as it was later known) resolved to organise for the limiting of the working day to eight hours from May 1, 1886. They were joined by the Knights of Labor and smaller radical groups, and more than 300,000 workers participated in the national strike that was called for that day.

In Chicago, the centre of the emergent working class movement, 40,000 workers struck. Two days later two strikers were killed at the McCormick Reaper works. A number of anarchist leaders called a meeting in Haymarket Square for the following day and 3,000 attended. As the meeting was wound up a bomb was exploded near the police lines, possibly thrown by an agent provocateur. Five anarchists, including Albert Parsons and August Spies, were executed after a trial that was more about their political beliefs than what had happened on the day.

Before his assassination, August Spies warned; “If you think that by hanging us you can stamp out the labour movement ... then hang us! Here you will tread upon a spark, but there and there, behind you and in front of you, and everywhere, flames blaze up. It is a subterranean fire. You cannot put it out.”

The ongoing commemoration of May Day is vindication enough of his words.

In July 1889, at the hundredth anniversary of the fall of the Bastille during the French Revolution, the foundation meeting of the Second International was held. At that meeting a call for demonstrations on May 1, 1890 was made and heeded. The Sydney Morning Herald reported that the wealthy of Vienna were so worried about the demonstrations that they were “placing their valuables in the custody of banks.” May Day was established in the minds of both those for whom it was a celebration and for those to whom it was a warning.

In Australia, according to historian Len Fox, the first May Day march was conducted by striking shearers in Barcaldine in 1891 (the year before the Melbourne Social Democratic Club had held a May Day meeting). It was reported that 1340 men took part. Henry Lawson composed the poem, Freedom on the Wallaby, in protest of the use of armed troopers to crush the shearers’ strike:

So we must fly a rebel flag
As others did before us,
And we must sing a rebel song
And join in rebel chorus.
We'll make the tyrants feel the sting
O'those that they would throttle;
They needn't say the fault is ours
If blood should stain the wattle.

The official Labor Day demonstration, which commemorated the establishment of the eight hour day, was traditionally held by trade union councils in April. It was the stronghold of the more established unions – often only those unions who had already established the eight hour day were allowed to take part. May Day by contrast was seen as more radical, a challenge to the Labour Day celebrations that seemed content to proclaim their respectability and self-reliance.

By 1898, some 35,000 people attended the Melbourne event to hear the English socialist Ben Tillett.
May Day demonstrations were banned by the Menzies government in 1941 and 1942, but have occurred every year since, through the highs and lows of the Australian workers’ movement.

In times of little struggle it can be just the old-timers and a handful of the Left who show up each year to mark the occasion.

But the meaning of May Day is not one that can be “stamped out”. Because it is a day to both honour the past struggles and to engage in the current ones, it will always remain a day to mark on the calendar. In Australia, May Day has been the time of demonstrations for a huge range of progressive causes, from the anti-conscription battles of the First World War to anti-fascist mobilisations in the 1930s to the anti-Vietnam War campaign and the equal pay disputes of the 1960s.

During the anti-globalisation protests of 2000, the May Day march was attended not just by the Left, but tens of thousands of trade unionists, who marched on the Melbourne Stock Exchange venting their indignation at the inequalities and poverty caused by capitalist greed – a familiar refrain for May Day.

In the US, May Day has now become a central focus for the movement for immigrants’ rights, sparked off in 2006 when millions of undocumented workers struck and demonstrated along with their supporters.

Whether there is a million or a hundred on the street, May Day is a tradition that we are proud to continue. It is a celebration of the rights, like the eight hour day, that we have won in the past, and a reminder of the rights we still have to win. Above all, it is a celebration that the vision of a fundamentally better society is one that is shared with others throughout the world, and has motivated so many throughout the years.

For those who will join the marches this May Day the words of Bernard O’Dowd, who, among other things was a founder of the paper, the Tocsin, and of the Victorian Socialist Party, from his poem, May Day are fitting:

Come Jack, our place is with the ruck
On the open road today,
Not with the tepid "footpath sneak"
Or with the wise who stop away.
A straggling, tame procession, perhaps,
A butt for burgess scorn;
Its flags are ragged sentiments,
And its music's still unborn.
Though none respectable are here,
And trim officials ban,
Our duty, Jack, is not with them,
But here with Hope and Man…
And how the gales of Freedom move,
Like wildfire's leap and fall,
Or north wind's through autumnal grass,
The red flags over all.
Yes! There's our place, whatever flames
Those nearing clouds display,
Tho' much they mean to footpath sneaks
And the wise who stop away. 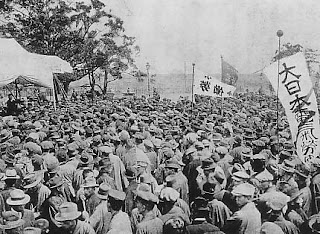 [May Day is a celebration of internationalist working-class solidarity. This picture shows the first May Day in Japan, on 1st May 1920]

Posted by International Socialists at 13:23