Whose Port? Our Port! 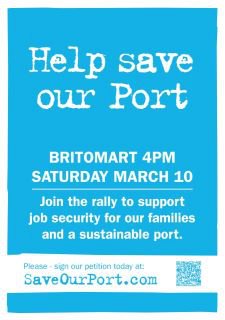 “There must be over five thousand people here!” - that’s the text I got from Gerry Cotterell, a TEU member I’d arranged to meet today, and he was right. We came in our thousands to show our support for striking Maritime Union members. Firefighters, teachers, public servants, supermarket workers: the sea of banners and flags showed the union movement out in support of the wharfies. And, as well as these, there were the flags of Australian and US wharfies’ unions too, the brothers and sisters of MUNZ joining the struggle.

The size and energy of the rally were inspirational, and a sign of the potential strength of our side.

The mood was defiant and political. “Whose port? Our port!” was the most popular chant. “Tahi, Rua, Toru, Wha: the Ports of Auckland has gone too far” went another chant. Ports of Auckland have picked a fight, for sure, and it’s one that links to an issue that affects all workers: casualisation.  A classic slogan was chanted today, and we can make it a reality: The workers, united, will never be defeated.

Others pointed out the hypocrisy of Port bosses talking about the need for worker ‘flexibility’:

The directors get paid $14 000 per meeting: greedy bastards.

One member of Local 13 explained the way the basic issue in the conflict - the wharfies’ right to protect their conditions, and to have regular, stable work - is being confused by the company and the media:

"Tony Gibson has been making these broad brush statements with no substance what so ever, he reads a 10 page article and will quote 3 sentences out of it, all out of context. They are contracting out our workforce - and that has been the plan all along - and these companies that are getting the contracts - our work - are also owned in large part by senior staff at the Ports of Auckland. Some of the directors and major investors of these companies are on the board of the Ports of Auckland. This is so wrong and that’s why we have to fight."

“We have 1700 meatworkers locked out by Talleys and they are facing the same problems,” a MUNZ member said. “We also have the Oceania workers in the same situation.” 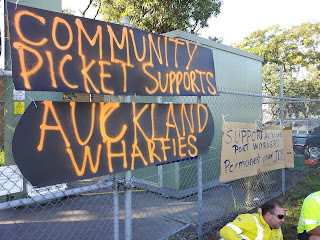 There were union contingents from the MUA in Australia and the watersiders’ union in the United State here to show their support. In an inspiring display of solidarity, MUA members in Sydney struck today to prevent scab-loaded ships from Auckland being handled.

This international solidarity can build the struggle here, and it inspires us to keep up the fight.

Gary (MUNZ - “unionist until he dies”) told us “it has been good mingling with the comrades from across the ditch. The Australians have a harder attitude towards these scabs - these scabs are stealing the food from out of our families’ mouths.”

Russell, an MUA member over for the rally, told us how wide the reach of this union international support went. He’s ready for an ongoing battle:

"Any community picket that MUNZ workers put up will not be crossed by any member of the MUA, there is international solidarity with workers from around the world. The Dutch, France, Italy, the States, Australia, South Africa, even Egypt where they are having a meeting next week to decide whether to blacklist ships from the port of Auckland. You see that the similarities between the wharfies campaign and the lockout Affco workers are facing.

“This is a fight against casualisation and the fight is worldwide. We can’t let the most militant union in the country fall."

One of the ILWU leaders from the US expressed similar sentiments in one of the main speeches:

"American dockworkers supports MUNZ to the hilt. This is a fight against the flood of casualisation and temporary work, and this is where working people take must take a stand and fight the insane levels of inequality.

“All the leaders of the different branches of the ILWU have come from the states to support the wharfies… the media has been asking us well what are you going to do? Well, what do you think we are going to do!"

Labour leader David Shearer spoke, but got an unenthusiastic reception, and was even heckled by some parts of the crowd. (“Stop sitting on the fence!” was heckled often). His boring and waffling speech, which was short on detail, did not fit the mood of the day -- most of the protestors we spoke to were disappointed at Labour’s almost total silence on the issue. Everyone was disgusted with Len Brown, the mayor for “all of Auckland” who claims to be able to do nothing to stop the sackings.

Helen Kelly from the CTU called this a “fight we have to win - that we will win,” while Garry Parsloe from MUNZ called the Ports’ plans “an absolute disgrace and a sham”.


Mick Doleman from the MUA used his speech to tear apart the bosses' lies about what 'flexibility' and 'efficiency' mean. These are just code words for greater exploitation, and they fit an international pattern:


"We did not fight fascism and imperialism just to become commodities. This is all about decreasing the unit production cost, and so they are attacking the workers. This battle against casualisation is worldwide...We have brought 30 delegates over here and to show our support we are donating $100 000 to the Local 13 branch of MUNZ."


"This fight is just beginning and it will only continue. You do not walk alone -- workers from around the world support you and your struggle."

Dare to Struggle! Dare to Win!

I came away from the rally feeling buoyed by its show of strength. There is obviously big support for the campaign.

All of the MUNZ members interviewed were determined to fight. It’s up to the rest of us to back them.

Marching with the rally gave us all a sense of what union power means. This YouTube clip captures some of the day's size and energy:

Earlier in the day in Dunedin our comrades were involved in a solidarity rally called by Unions Otago for Ports of Auckland workers. Around one hundred people marched and there was representation from a number of unions, including the PPTA, PSA, and Unite, and over $300 was collected for the fighting fund. In a sign of the depth of support for the workers, even the Otago Daily Times conceded that "most of the lunchtime crowd appeared to support the marchers"!

[Derwin Smith contributed to this article. Josh Lee from Socialist Alternative in Sydney provided the photograph of the community picket there.]

Posted by International Socialists at 03:22