Save Our Port: Auckland workers strike back 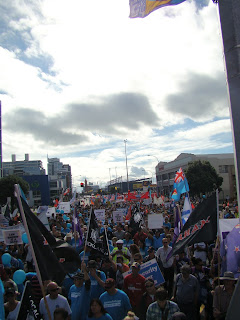 Report and photos by Cory Anderson 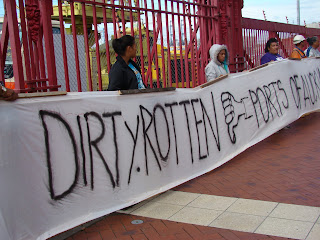 Over 3,500 workers marched in Auckland on Saturday in support of Auckland wharf workers who have been on strike since February 24th.  Members of the Maritime Union of New Zealand (MUNZ) from ports around the country marched alongside workers from other unions including the professional fire-fighters union, the RMTU, PSA, SFWU, NZNO, NZEI, Unite and others, as well as representatives and members of unions from overseas, including the Maritime Union of Australia (MUA), the International Transport Workers Federation (ITWF) from North America and the Electrical Trades Union of Australia.  Locked out meat workers from Affco also attended in an impressive show of solidarity. 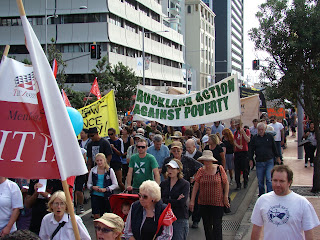 Flags from around the world featured as the marchers made their way from Brittomart Station to Fergusson terminal, the site of the dispute.  The noise was tremendous as cars, busses and trains tooted in support, while the workers chanted “Whose port? Our port!”, “Tahi, rua, toru, wha; Port of Auckland has gone too far!” and “Stand up, fight back!”. 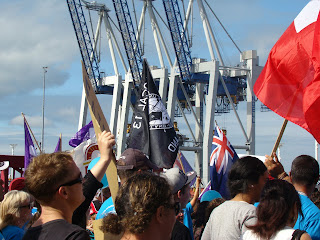 Much of the marcher’s anger was also directed at the ‘left-leaning’ Auckland Mayor Len Brown, who has refused to back the wharfies, claiming he is “powerless” to intervene in the affairs of the city-owned port.  Protestors were clearly fed up with the Mayors spineless stance, some carrying placards saying “Len Brown: scab” and “Browned-off voter supporting wharfies”. 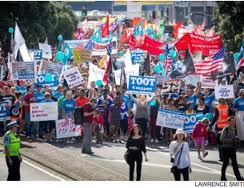 The strike and protests are in response to the Port of Auckland’s attempt to casualise its workforce and force and replace full-time jobs with contractors.  Under a contracting model, security of hours and security of earnings for port workers would be eliminated.  Port workers currently get every third weekend off – the port wants to change this with only 24 hours notice.  Likewise, shifts could last anything from 3 to 12 hours, and could be changed at only 5 hours notice.  Workers would have to wait by the telephone, waiting to be called up – a modern version of the old-fashioned ticket scramble. 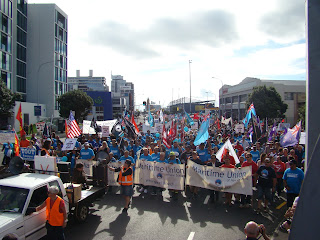 Casualisation would also weaken union solidarity by forcing workers into competition with one another, opening the way for the port company to dismantle hard-won gains in pay and conditions.  Unions internationally are worried about the threats casualisation poses to workers.  Maritime Union of Australia members marching alongside their Auckland colleagues expressed concern that if contracting was introduced into Auckland, Australian ports might follow.  MUA workers have supported Auckland wharfies by striking to stop the unloading of ships loaded by non-union labour in Auckland.  Support has also come from further abroad, with Ray Familathe, the representative of the US-based International Transport Workers Federation promising that workers in ports across the world would “look at all means of support possible”. 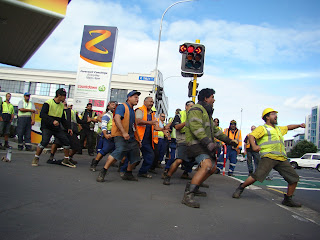 If workers internationally have been quick to support the Auckland wharfies, the same cannot be said for the local Labour Party.  Labour Party leader David Shearer has for the past two weeks equivocated over the issue, describing the dispute as “disappointing” – despite the fact that MUNZ is one of the few unions to remain affiliated to the Labour party.  While Shearer and other members of the Labour Party caucus did in the end attend the demonstration, the Labour Party leader was heckled by workers during a speech that drew only timid applause.  And deservedly so, for he had nothing to say about the conduct of fellow Labour Party member Len Brown!
*****

Both Brown’s paralysis and Shearer’s equivocation share a common root.  While they might oppose asset sales and Shearer offers token support to wharfies, the Labour Party remains committed to the profitability of New Zealand capitalism and wants a fight with employers almost as little as National.  So when the port company complained it wasn’t able to deliver returns comparable to its competitors (in China, Hong Kong and Africa), Len Brown was quick to comply.  Len Brown wants POAL to pay the biggest profit he can get, so even if he does make good on his offer to mediate the dispute, the result is unlikely to be favourable to the workers unless the company is made to give in. 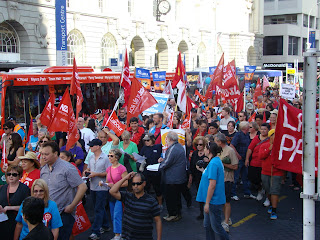 But there is an alternative to the mealy-mouthed speeches of politicians.  Bosses have gone on the offensive around the country, but the can be stopped by action from the workers.  Workers realised the power they had when the reached the Fergusson terminal, to find it blocked by only ten security guards.  Many just laughed.  There was a rousing cheer as the meat workers arrived on the scene, still in full voice.   By taking the fight to our workplaces and the streets, we can defend our pay, our rights and our public assets.  The demonstration in Auckland is only the start.  It must be followed by pickets and strikes at wharfs around the country to stop scab ships being unloaded and deny the Port of Auckland its income.  Already the container ship Maersk Aberdeen which was due in Nelson has turned tail and fled.  Workers have been made to pay for crisis and recession for long enough – it is time to hit the bosses where it hurts: in the pocket. 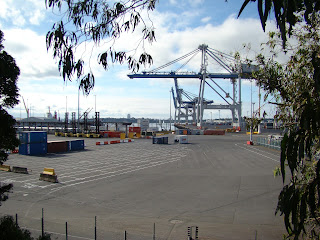 Posted by International Socialists at 23:25