They're right to strike

Labour's spokesperson for labour issues, Darien Fenton, has called the Ports of Auckland dispute "some of the worst industrial action we've seen in New Zealand for a decade".

That pretty much sums up the difference between those who want to manage the capitalist system, whether Labour or National, and the interests of the working class. The worst industrial action of the last decade is all the strikes that NEVER happened. The Ports of Auckland dispute is the best fight our side, the working class, has put up in decades. 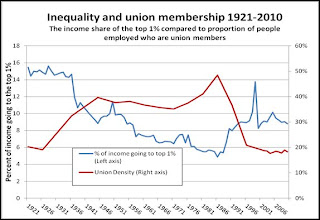 Check out this graph – it shows clearly that belonging to a union is the best way to build a fairer society. But belonging to a union means nothing if you can’t go on strike. Check out the period from the latest 1970s to the mid ’80s. This period saw the most people on strike in NZ history, but workers’ wages and conditions were better than they are now, and poverty was nowhere near as entrenched.

Strikes are good. Strikes are necessary. In one sense, they are no big deal. Workers should strike every pay negotiation just to remind the boss of the value of our work. In another sense, strikes can change the world. As Lenin said, one general strike is worth ten general elections.

Now that the workers have been laid off, Len Brown wants to "move on" and it’s only a matter of time before Darien Fenton joins in, encouraging workers to give up on this fight and wait to vote Labour back in 2014. But check out the graph again - union density starts falling in the 1980s, under the Lange Labour Government.

But tell that to the port workers at Wellington, Lyttleton and Timaru. They will be ordered by the court to handle scab ships because Labour's employment law - the Employment Relations Act - bans sympathy strikes. The POAL bosses have just sacked 300 workers for trying to bargain collectively.  Any supporting strikes are illegal under Labour’s own law.

What else can port workers do but keep fighting and smash an unjust law?
Posted by International Socialists at 18:00