Striking back against casualisation: why we support the Maritime Union

[Dave Keirns gave this talk to the ISO Dunedin branch earlier in the month, and before yesterday’s injunction was reported.] 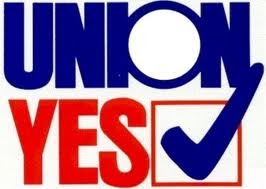 There is an industrial dispute at the Auckland Port between Ports of Auckland Ltd (POAL) and the port workers, who load and unload ships, represented by the Maritime Union of New Zealand (MUNZ).
The person speaking on behalf of the company is CEO Tony Gibson, who has held management positions in several overseas shipping companies, spent three years as the managing director of Maersk NZ (an international, Danish based container shipping operator, which was recently fined $31 million for overcharging) and has been POAL CEO for eleven months. He receives $750,000 per year.

The person speaking on behalf of the workers is MUNZ National President Gary Parsloe, who earns $66,000 per year. The base rate for a wharfie is $57,000.

This article will cover three aspects - A report on events to date and a comparison with the 1951 waterfront lockout.

A discussion of the stance taken by political actors (the Auckland Citiy Council, Act and National, the Maori Party and united Future, Labour, the Greens, Mana and the Alliance) and by the union movement, including the Council of Trade Unions (CTU) and the Rail and Maritime Transport Union (RMTU) and rank and file union members (from a quick survey of attitudes at Hillside engineering workshop).

Strike Action on the wharf

Because of the 24/7 nature of the port, and the uncertainty of shipping schedules, there is a lot of flexibility already built into the collective agreement. It allows for up to 25% of the workforce to be casual employees (current level is 20%). They are not guaranteed any work, are employed shift-by-shift and their only job security is that if they are called in they are guaranteed 8 hours minimum.

The contract allows for 27% of the workforces to be employed as “P24s” - permanent workers who are guaranteed at least 24 hours per week (3 x 8 hour shifts).

The remaining 53% of the workforce are full-time permanent employees, entitled to 40 hours per week over 7 days. They are able to stipulate one preferred day off per week, otherwise they must work any day, at any time of day.

The ability of the company to employ a mix of full-time, part-time and casual staff means they can easily meet the requirements of shipping schedules.

The 2010/2011 annual report and 2011 annual review of the Port notes that container and bull cargo volumes increased despite the depressed economic circumstances and that all time best crane rates were achieved that year, up 4.1% on the previous quarter.

Interconnect, a Port magazine for customers said staff hours per container had decreased 16% since 2007.
A Ministry of Tranport investigation into container rate productivity of New Zealand ports rated Auckland as comparable or better than other international ports. Of the 6 main container ports in NZ, Auckland, Tauranga and Otago were rated as the best operations.

An existing bone of contention was that during the term of the last agreement, management contracted out driving of four container shuttles, despite the job being covered by the union members' collective agreement.
This was followed by a “consultation period”, which I have come to know through the process at my workplace as “listen and ignore”. It ticks the box for engaging in consultation but it's not real. It is entered into with a predetermined result.

Disagreement led to the union's first strike notice. This strike was not carried out, as the parties went into mediation in January. The union agreed to more roster flexibility including changes to the overtime roster, greater use of part-timers and other concessions.

Management said at the time these concessions addressed their major concerns but shortly after, didn't want to settle the agreement and came back with a list of demands that were a “final offer”.

They included the complete removal of restrictions on the balance of permanent, casual and part-time workers (ie all employees will be casual); the minimum guaranteed shift to be 3 hours not 8 hours; and random drug testing and bag and body searches (which raises human rights and equality issues – e.g. will Gibson be strip-searched for cocaine?).

Something hardened in the POAL attitude here. There stance changed from being a predictable arsehole to a position that required the union either to submit completely or to adopt a confrontational attitude.
After some partial strikes, the union called an all-out three week strike on February 24. After a week and a-half, the company declared all union workers were “redundant” and there would be no more negotiation with MUNZ.

In the 1951 Waterfront Lockout, the National government and shipping companies were able to manufacture a dispute over pay by offering a lower pay increase to wharfies than was given to most other workers at the time. Overtime was essential to the operation of the ports because then, as now, the companies consistently refused to employ enough workers to allow the work to be carried out in a 40 hour week.

When the Waterfront Workers Unions withdrew overtime, the employers locked them out.
Emergency regulations were passed. The military ran the wharves, censorship was introduced and police powers increased. It was made an offence to assist the strikers. The government was prepared to starve families and children. Wharfies had no income, no food and no help. Like now, the Labour Party leadership (under Walter Nash) was silent. When some Labour M.P.s did move, it was too late because they were banned from publicly supporting the union by the emergency regulations.

Whether more repressive regulations are introduced by the Key National Government is yet to be seen.
They may not have to because they have set the scene already, through employment law. For business owners to attack workers.

The Key government has introduced further restrictions on union access to the Clark Labour government's already restrictive employment law and plans to reduce workers' access to justice by reducing the status of the employment court.

Furthermore, the Auckland “Supercity” laws mean the the owners of POAL, the people of Auckland, need not be consulted if privatisation were planned.

It would be interesting to look at accident statistics before and after the 1951 lockout.

Who is saying what?

The Auckland City Council, led by “left” Mayor Len Brown has not come out in support of workers. The council had, in fact, before the dispute demanded a doubled return from POAL of 12%. There have been some honourable exceptions, like the left-wing councillor Cathy Casey. Councillor  Richard Northey's motion backing the wharfies was voted down.

The Labour Party is scarcely to be seen. David Shearer has kept his distance. Labour relations representative Darien Fenton (a fierce opponent of reinstating the pre-1991 right to strike) has been on the picket lines though. Labour has said National's planned employment law changes have emboldened bosses to attack wages and conditions.

National, not surprisingly, have denied having an anti-worker agenda.

Act and the Maori Party have not been involved, but are effectively lackeys of Key.

The Greens have criticised management and claimed there is an agenda to privatise the port.

Internationally, the International Transport Federation has come to MUNZ's support and the Maritime Union of Australia has pledged $130,000.

Rank and file workers, however, seem to have limited engagement. An informal survey of 6 workers at Hillside engineering workshop showed:

most were unclear on the issues of the dispute

all agreed MUNZ should be supported in principle,

not all agreed the industrial action was good, but only one thought there was any other option

Only two would strike in support of the Auckland workers

all would donate to a strike fund

What is a socialist perspective?

This issue forms part of a class war fought by working people who create the wealth. When you consider the setting where this takes place, and the vesated interests of the parties involved, it becomes clear to see what is behind the words of the ruling class.

If they, the owners, who represent the ruling class of capitalist society, keep wages low through casualisation and by creating competition for work make jobs insecure, they get bigger returns for shareholders, eg the Auckland council. Then it becomes attractive to private owners, and leads to a power imbalance between owners and workers, aided by employment law.

The government and business have been successful in drawing the public and workers into accepting a capitalist point of view, based on workers disengagement.

We need to raise awareness and show that the many struggles have common causes, and what those causes are.

There should be collections in every workplace and campus to get funds to the struggle. We need collections everywhere, particularly workplace collections. Every union should have printed official collection sheets by now and organised weekly collections on every work site. Anybody can start a collection anywhere. There are details of how to donate on the Save Our Port website.

Donations can keep strikes going but do not win them. Real solidarity action - sympathy strikes - are the way to win. The most powerful weapon is picketing. The bosses hate it with good reason. Picketing at the Auckland wharf and flying pickets to other ports, particularly Tauranga, is key. Rank and file workers talking to rank and file workers is the best way to win solidarity action, whether that is truck drivers turning round or sympathy strikes. That may mean breaking an unjust anti-working class law - so be it. 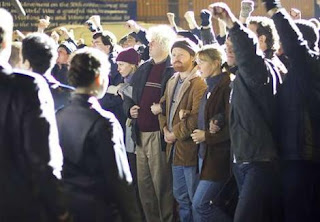 [MUA - here to stay! A still from "Bastard Boys", a 2007 TV dramatisation of the MUA struggle]

It was mass pickets of the wharves in Australia in 1998 – drawing in thousands of supporters of the MUA there – that stopped plans to destroy the Maritime Union of Australia. The MUA faced media demonization, allegations of ‘violence’ and all sorts of dirty tactics by the Howard government and the bosses, but stood firm, and kept and built wider community support. The British miners won in 1972 when thousands of engineering workers struck and supported the miners' mass picket. They lost in 1984-85 because there were no sympathy strikes, only massive financial support. The informal survey at Hillside shows there are obvious differences between those situations and now, but we are going to need to re-learn these lessons if we are to defend our unions.
Posted by International Socialists at 14:31