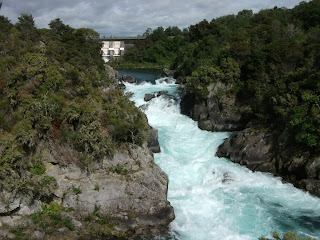 The Waitangi Tribunal has told John Key to “taihoa” - to wait a little with his plans to privatise state owned electricity companies.

Key thought he could sell the companies after he won the election but the Maori Council has thrown a spanner in the works by putting in a claim for freshwater.

A hydro dam is pretty useless without water to drive it.

Even before Key suggested privatising the hydro companies, Maori had put in claims for rights to freshwater but the privatisation plans forced the Maori Council's hand.

If the dams are privatised, the chance of Maori getting any acknowledgement or compensation from the private companies will disappear. The “mum and dad investors” (in other words a small minority of wealthy New Zealanders) will instead reap the benefits of the rivers.

The Tribunal said Maori obviously used the lakes and rivers before colonisation, and so they have rights that are best translated into an English legal definition as ownership.

“We agree that the claimants' evidence has demonstrated the customary 'indicia' of ownership and that 'full-blown' ownership of property in the English sense was the closest legal equivalent for Maori customary rights in 1840,” the Tribunal report said.

This is an interim report, but the Tribunal is unlikely to change its mind on this fundamental point.
So, is this good, bad or indifferent for working people? 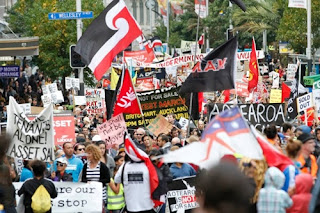 For a start, it has slowed down the privatisation and created debate, which is good.
If iwi swap their opposition to privatisation for shares and a seat on the board, it will bad because it will allow privatisation to go ahead, but better than if Maori got no compensation.

Socialists should support the Maori struggle for justice and self-determination. We have to commit 100% to the struggle against more than a century of colonialism. This means supporting compensation for historical grievances even when it is plain to see the main winners from settlements will be iwi corporates.

That does not mean being uncritical. The corporate strategy is just one, very risky, strategy. Most settlements are in the form of ownership – and what is owned can be sold. As the whole of NZ is finding out, our assets can be sold against our will. The same goes for iwi assets.

Private property in the form of market commodities is not the only model. The power companies should be run in the interests of human need, not profit, by:

1) the people who actually go to work everyday to keep NZ humming.