[The dispute between Grollo and the construction workers' union - CFMEU - in Australia is extremely important, and has lessons for unionists in New Zealand. Here Jerome Small, CFMEU member and Industrial Organiser for Socialist Alternative in Australia, reports on the struggle.] 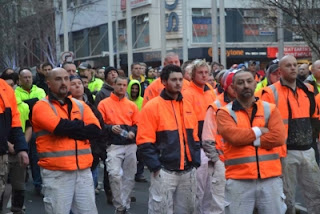 The police are prepared for a bloodbath. Row upon row of cops stand behind a temporary fence that keeps picketers well back from the giant construction site. Behind them more police, with Alsatian dogs on leashes.
Police horses gather on the corner of Swanston Street, prepared to charge on construction workers. There is no shortage of riot police to back them up. Early morning commuters parking in the QV Centre are startled by the sight of hundreds of riot police in the basement car park, banging batons on their shields as they work themselves into the frenzy required to batter unarmed human beings.
Altogether, probably over a thousand police are mobilised to smash the picket line. The ambulance service has been notified, and emergency departments are on standby for the expected casualties.
These are the scenes from central Melbourne last Friday, and repeated this morning (Tuesday). Ted Baillieu’s police force is backing-up the giant construction company Grocon in its bid to run sites without on-site union representation.
After the hysterical press campaign last week about the supposed “reign of fear” and “union thuggery” on Victoria’s construction sites, we saw clearly on Friday, and again on Tuesday, who is willing to use sickening levels of violence to enforce their will: Ted Baillieu’s police against workers standing up for their rights.
This reflects the enormously high stakes in the battle between Grocon and the main construction union, the CFMEU. The outcome of the dispute will have an impact for years to come in the construction industry.
A win for the company will mean that the biggest sites in Melbourne will proceed without any effective union presence – a massive defeat for one of the most militant and effective unions in the country. A clear win for the union will signal to the whole industry that the slow spread of shonky, non-union contractors can be brought to an end.
In fact, the implications reach far beyond that. Despite taking some hits from a series of vicious anti-union laws, the CFMEU has maintained an active presence on the vast majority of commercial construction sites in Melbourne. This puts it head and shoulder above unions in many other industries in Australia, where decades of defeat and retreat mean that full time shop stewards and active organising are a distant memory.
The capitalist press is bellowing about a return to the “bad old days” of industrial disputation in the 1970s, when workers and their unions won decent wages and conditions in a series of bruising industrial battles. This reflects a fear that the Grollo dispute will revive union fortunes not just in construction but beyond.
So it is no surprise that a conga line of right wing hacks, newspapers and employer bodies has formed, demanding blood be spilled to break the picket. The Australian Industry Group complains of “militant and unlawful” behaviour from the CFMEU, the Victorian Chamber of Commerce condemns “intimidation and harassment” from the union, while the Master Builders’ Association goes with “illegal and reckless”.
What they mean, of course, is “effective”. It is perfectly legal to join a trade union, and even to picket, so long as you aren’t effective in stopping production – one of the most serious crimes in a profit-driven society. Just last month, a NSW boss was fined just $30,000 after 15-year-old Kevin Hadfield was dragged into a metal lathe, lost his arm and then died. No front page screaming from the papers and politicians about that.
In July, Toll Holdings was hit by an effective picket line at a warehouse in Somerton, Melbourne, that it operates for the supermarket giant Coles. The company was forced to give major concessions to the union. So it is no surprise to find Toll’s chief executive Brian Kruger showing his solidarity with Daniel Grollo, calling for “more significant penalties, particularly in terms of fines or potential jail time” against picketers.
Victorian Liberal premier Ted Baillieu has called for deregistration of the CFMEU, which would stop the union from negotiating legally-binding enterprise agreements. He has talked tough, threatening to rewrite the Riot Act in order to more effectively sweep pickets out of the way. And his attorney general has sought to join the contempt of court action against the CFMEU, adding to the massive legal and financial pressure being brought to bear on the union.
Federal workplace relations minister Bill Shorten has joined this chorus, declaring that “the blockade is a terrible idea, and the mob should get off the street”, and denouncing the tactic as “industrial stupidity”. Shorten’s “smart” way is to let the union be sidelined, and he openly welcomed the fact that small numbers of scabs have crossed the picket line on Friday and again on Tuesday. 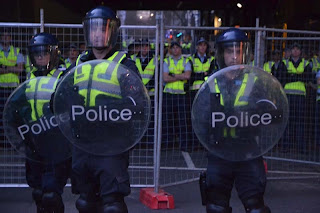 Faced with this enormously powerful list of enemies, our side has only one weapon – solidarity. This dispute is shaping up as potentially the most important industrial battle since the MUA dispute of 1998.
On that occasion, mass pickets of thousands on a daily basis kept the docks shut. The thousands of rank and file construction workers who have been calling past the Grocon picket in Lonsdale Street every morning – many answering a call from their union, others just turning up – are the basis of this kind of response.
Beyond that, serious contingents from the metals construction division of the AMWU and smaller groups from the Maritime Union, the Firefighters Union, the National Union of Workers, the Australian Services Union and many others have also appeared at the picket over the last week. Many of them are workers repaying a debt of solidarity to construction unions, who have supported innumerable disputes – from the nurses to the Coles Somerton dispute – over the years.
The Victorian Building Industry Group of unions, which includes the CFMEU, the Electrical Trades Union, the Plumbers Union and the AMWU, has endorsed a state wide strike to support the picket in the event of a serious police attack.
The CFMEU strategy since Tuesday has been to avoid a physical confrontation on the picket line. A small number of scabs, mostly managers and other non-productive employees, have been able to access the site under heavy police escort.
But as of Tuesday afternoon, there has been no production on site for two weeks. The reality is that building sites need more than labour. They need a vast amount of material delivered daily, and they need concrete delivered and pumped. To do all that requires clear access for trucks to the crane bays.
It is one thing for Victoria Police to get access for a small number of scabs. It would be an even more massive and ongoing operation for them to clear the streets and keep them clear to allow access for material – especially the continuous convoy of concrete trucks necessary to pour a slab. Even the most massive police operation will have a hard time doing this on a daily basis against determined mass pickets.
Grocon boss Daniel Grollo has reportedly taken on a mountain of debt in order to buy out other family members from the family business. For the last couple of weeks, servicing that debt has looked difficult if not impossible. He has faced disruption on a number of jobs, and pretty much the only thing moving on his landmark Lonsdale Street Myer job has been the pigeons.
However, this standoff can’t last indefinitely.
Grollo has rejected out of hand the idea that his legal action and the union’s blockade could both be lifted to allow talks. This and the extraordinary police deployment, the ferocious attacks of the press, and the open proclamation of Australia’s business elite all point in the same direction. Our rulers are prepared to deploy massive force to batter a key union into submission.
Well over a thousand construction workers have, over the last week, made it part of their daily routine to call past the picket from 5am. Thousands more have made it clear they are prepared to descend on the site at a moment’s notice if the union gives the call. Outside of construction, traditions of solidarity have awoken again – especially in blue collar workforces with a union tradition.
It is these workers in their thousands and tens of thousands who can, if called into action, stop Grollo in his tracks – and strike a vital blow in turning the tide for workers and our unions in Australia.
Posted by International Socialists at 23:55