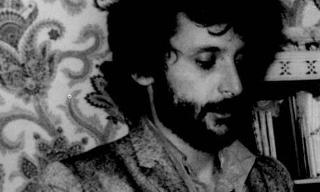 Blair Peach was murdered at the hands of the Metropolitan Police on 23rd April 1979. Blair was an east London teacher who had gone to Britain from New Zealand. He was also a member of the Socialist Workers Party (SWP) and the Anti Nazi League. He was killed protesting at the Nazi National Front (NF), which was holding a meeting in the predominantly Asian area of Southall, west London.

Amidst a climate of crisis and terror - as the FN in France celebrate a big vote in the presidential elections, and as the mainstream media report Breivik's hate-filled fascist testament from Norway - the causes Blair gave his life for, anti-racism and anti-fascism, have lost none of their relevance or urgency.

We reprint an article from the British Socialist Worker below, which was first published to mark the 25th anniversary of Blair Peach's death. A further article from 2010 provides updates on the long campaign to bring Peach's killers to justice.

The International Socialists celebrates Blair Peach's life as a socialist, unionist, teacher, and anti-racist. We will mark his memory by continuing the struggle against oppression and racism here in Aotearoa.

"As the police rushed past him, one of them hit him on the head with the stick. I was in my garden and saw this quite clearly. He was left sitting against the wall. He tried to get up, but he was shivering and looked very strange. He couldn't stand. Then the police came back and told him, 'Move! Come on, move!' They were very rough with him and I was shocked because it was clear he was seriously hurt."

This was the shocking testimony of Southall resident Parminder Atwal, one of the witnesses to the murder of Blair Peach at the hands of the Metropolitan Police on 23 April 1979. Last Friday, 25 years after his murder, a piece of artwork was unveiled and a memorial meeting held in the area where he was killed.
Blair was an east London teacher who had come over from New Zealand. He was also a member of the Socialist Workers Party (SWP) and the Anti Nazi League. He was killed protesting at the Nazi National Front (NF), which was holding a meeting in the predominantly Asian area of Southall, west London. His police killers still walk free.

The National Front had announced it would hold a "general election" meeting in Ealing Town Hall on Monday 23 April 1979. Local people were appalled. They knew that fascist meetings bring fascist violence. Three years earlier an NF-inspired gang had stabbed Gurdip Singh Chaggar to death in Southall.
But the local Tory council gave the Nazis Ealing town hall to meet in. Local people did all they could to get the meeting banned. The day before 5,000 people marched to the Town Hall.

Southall Anti Nazi League activist Balwinder Rana recalls, "The march was attacked by the police, who picked fights all along the way." The then Labour home secretary, Merlyn Rees, refused to ban the meeting. Three thousand police, with dogs, horses, riot vans, a helicopter and units of the notorious Special Patrol Group poured into Southall.

At lunchtime Southall's shops closed in protest at the Nazi meeting. Some factories shut down and Asian workers at nearby Heathrow airport walked out. Anti-Nazis arrived in Southall in solidarity. At around 3.30pm some demonstrators tried to get on a bus going through the police cordon. The police threw everyone off. Those arrested included Mr Rihal, on his way home to look after his wife who had just left hospital.

The police later lied and said he had damaged the bus. He got three months in jail. As Balwinder recalls, "At about 6.30pm people started to go towards the town hall. Suddenly the cordon parted and police on horseback came through and started to hit people with long batons. They attacked men, women and children." Police vans speeded through the hemmed-in crowd.

Inside the Nazi meeting the local NF candidate was pledging to "bulldoze Southall to the ground and replace it with an English hamlet". People outside were confronted with a full-blown police riot. The Daily Telegraph recorded what happened:

"Within three minutes mounted police had cornered about 50 demonstrators against the churchyard walls. As we watched, several demonstrators were dragged crying and screaming to the nearby police station. Nearly every demonstrator had blood flowing from some injury."

The police surrounded 6 Park Road, which been designated a first aid and advice centre. The police kicked the door in and forced everyone to run a gauntlet of truncheon blows to get out.

Local activist Clarence Baker had been told earlier by the police, "You black bastard. We are going to get you." He remembered, "About six were hitting me with their truncheons. I felt one blow. I did not feel anything after that."

Clarence ended up in intensive care with a blood clot on his brain. At least three protesters were hit so hard their skulls fractured. Blair Peach was one of them. "At least two Special Patrol Group vans came up," remembers Blair's friend Jo Lang, who chaired last week's memorial meeting. The officers got out and charged us. We ran, but Blair wasn't with us. So we went back to look for him. An Asian family had taken him into their living room. You couldn't see how badly injured he was. It was later said that he was hit with a lead-filled cosh. While he was in the ambulance he started having fits. At 12 o'clock they phoned and told us he was dead."

News of his death sent shock waves through the British working class. The day before he was buried 4,000 local Asian people filed past Blair Peach as he lay in Southall's Dominion Cinema. Throughout the night Southall youth maintained a guard of honour over him. The next day the cortege travelled to east London.
Bengali people from Brick Lane, who Blair had stood with against Nazi terror, paid their respects. There were 13 national union banners on the 10,000-strong funeral procession. TUC president Ken Gill spoke at the graveside alongside Tony Cliff of the SWP.

When the lockers and some houses of Special Patrol Group members were later searched coshes, knives, bayonets, swords and Nazi regalia were found. The unit was later disbanded. But since then the police have been consistently deployed to defend Nazi events: from Bradford to Welling in south London, and in Birmingham and Manchester last weekend. 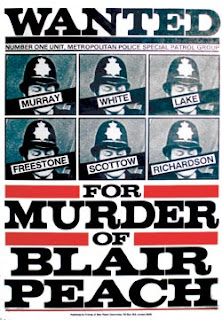 Posted by International Socialists at 20:40

Email ThisBlogThis!Share to TwitterShare to FacebookShare to Pinterest
Labels: Our History, Racism and Anti-Racism, Solidarity