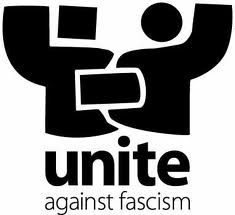 by Jim Wolfreys in Paris, writing for Socialist Worker


The first round of the French presidential election has revealed a dramatic rise in support for Marine Le Pen’s fascist Front National (FN).

Le Pen came third in the exit polls with 18 percent, behind the Socialist Party's François Hollande (29 percent) and the current right wing president Nicolas Sarkozy (27 percent). The FN’s support, up from 10 percent in 2007, represents around 6.5 million votes, the most ever won by the French extreme right.
How has this situation come about?

Mainstream commentators point to the FN’s “softer” image under Marine Le Pen as evidence that it has become more moderate. This is false. She may have made cosmetic changes to the party's public image, but the self-styled “revolutionary nationalists” who created it in the early 1970s always aimed to adapt fascism to present day conditions. She is still pursuing this strategy.

Over the past five years the FN has become the main beneficiary of Nicolas Sarkozy’s obsession with “national identity.” His presidency has combined austerity measures with a grotesque “bling-bling” lifestyle and the most relentlessly racist agenda of any modern French president.

The government has established and ruthlessly implemented deportation quotas for “illegal” immigrants. Roma camps have been smashed up and a vicious and sustained attack has been launched on France’s Muslim population. The state has decreed what Muslims should wear and where they should pray—by banning the wearing of the niqab in public and outlawing praying in the street. Sarkozy’s election campaign featured attempts, following Le Pen’s lead, to create moral panics about halal meat and Islamic fundamentalism.

The Islamophobia of politicians and parties across the political spectrum has legitimised the FN. This has made it easier for millionaire’s daughter Marine Le Pen to masquerade as an opponent of the “elite” and its austerity measures. She proclaims her party to be “the only opposition to the ultra-neoliberal left.”
Sarkozy and Hollande will now contest the second round of the election on 6 May. Polls suggest that Hollande is likely to win.

Despite the shock of the FN vote, the left has achieved its highest overall first round score since 1988. This was made up of support for Hollande’s programme of “fair austerity” and those who voted for Jean-Luc Mélenchon’s Left Front. His proposals for wealth redistribution and ecological renewal won 11 percent, with 1.2 percent voting for the New Anti-Capitalist Party.

Mélenchon rightly argues that the Sarkozy-Merkel axis at the heart of the European austerity project must be broken. The left has therefore to ensure Sarkozy is defeated in the second round.
Although the radical left vote is lower than anticipated, it indicates significant support for an alternative to austerity. An employers’ offensive is going to follow the second round, whoever wins. Fighting this will require a movement of industrial and political resistance that achieves maximum unity.

This means the left needs actively to confront the Front National and the tide of Islamophobia that has made racism respectable in France. The consequences of its failure to do this so far are there for all to see today. But so, also, is its potential to provide solutions to the crisis of French society.

The FN can be defeated. In the 1990s anti-fascists mobilised against its meetings and engaged in “democratic harassment” of the organisation. This helped provoke a damaging split in the party from which it is only now recovering.

[This article was first published at Socialist Worker UK]

Posted by International Socialists at 13:28

Email ThisBlogThis!Share to TwitterShare to FacebookShare to Pinterest
Labels: International