Protesting National's War on the Poor 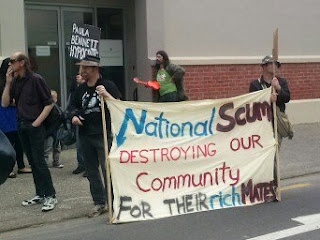 Today a nationwide protest against the war on the poor and more specifically the cuts to benefits took place outside the WINZ offices in all the major centres. 70 people marched on Paula Bennett's office in Auckland,  Wellington saw 50-60 people protest and Dunedin saw 150 protesters  fighting against cuts to welfare benefits. Other protests occurred throughout the country.

Unemployment looks set to rise with another recession predicted. The fight for taxes on the rich, more jobs with better pay and decent benefits for people out of work or participating in unpaid work such as childcare is increasingly important.

Blaming beneficiaries for the failures of the economic system is all to easy for this right-wing government, whose tactics have changed little since the 1990s.

In 1959 the official unemployment was 21. That’s 21 people not 21 percent. It was joked that the prime minister knew every unemployed person by name. But as the post-war boom ended, the nature of capitalism began to take hold again, the rot of recession set in, and unemployment began to rise. Since the global recession in 2008, 160,000 people are unemployed and 100,000 or more people are underemployed.

The government would have us believe that between 1959 and 2012 an epidemic of laziness swept the nation and hundreds of thousands of people became lazy bludgers, as Mike Treen, of Unite Union, puts it “some mass laziness psychosis that made us all quit our jobs and go on the dole.”

As unemployment began to rise in the 90s, so did the attacks on beneficiaries and workers. These included “dob-in-your-neighbour'' adverts for beneficiary fraud and the idea of inter-generational “bludging”. This is the same anti-working class rhetoric we hear today. It blames individuals and not the system that produces poverty and inequality. The benefit cuts in the 1990s coincided with the smashing of unions by the Employment Contracts Act, which contributed greatly to low wages and unemployment.

Official unemployment is 6.8% now. That number represents the people who in the past four weeks have been looking for work. The actual rate of unemployment is likely to be a lot higher because the unemployed who are not counted include those who have given up looking for work and those who are jobless but don’t collect the dole. Further, you are only counted as unemployed if in the survey period you didn't work at all – not even one hour, unpaid. You are not counted as unemployed if you are too ill or in training.

As “unofficial unemployment” steadily rises, the government is pushing people back out into the labour market for ghost jobs - there actually 2000 fewer jobs from March to June this year.

Benefit cuts are only the half of it. The war on the poor includes cuts at Housing NZ, the Family Court, and the Ministry of Social Development. Funding is being restricted to social services in a country where hardship rates rose from 15% in 2007 to 21% in 2011.

Funnily enough, as predicted, National cut taxes to the rich by 3%, as we saw the formation of the Welfare Working Group. By cutting benefits and punishing people for not looking for work in an environment of decreasing levels of jobs, big business can decrease the wage rate as people accept lower wages so not to starve.

Fighting for the wellbeing of those on welfare is fighting for the wellbeing of all workers. This is why these battles are so important. Capitalist rhetoric, which claims workers are paying for the lazy lifestyle of beneficiaries, serves to divide the employed and unemployed. As unemployment rises and more workers are laid off, expect to see more persistent propaganda spreading these lies. This protest is just the beginning, but to win this battle we must draw in workers and unions to support it, hitting the capitalists where it hurts the most; in their pockets.

The resistance around the world to austerity measures is growing. The Greek working class recently organised a 48-hour general strike and has been struggling against austerity in the workplace and on the streets for years. In the last week, Spain has seen mass protests against fiscal cuts and the last year's Egyptian revolution and the Arab Spring give us hope that internationally the tide may be turning in our favour.

To win any justice for beneficiaries we must build a fight back to the system which causes unemployment in the first place. We need to look toward a militant movement of striking workers alongside organised unemployed people as a force that could seriously challenge the governments agenda. This is fair way off and at the moment we need to build the small protest movements and support workers when they are on strike like we've seen at the Ports of Auckland, Oceania Rest Homes and Affco.