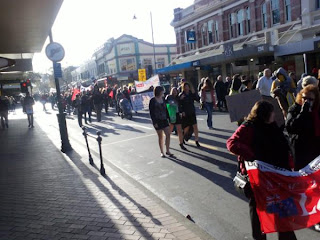 More than 1000 people took part in this lively event on Saturday. (The Otago Daily Times estimates between 1 - 2000). The march was led by bagpipes, with stilt walkers in the midst, and flags, banners, and pickets made for a very colourful group.

Onlookers joined, workers filmed from their places of employment, and kids rode on their parents’ shoulders, making it feel like a very family-orientated event, also making a mockery of John Key trying to make asset sales a family-orientated decision. There was plenty of chanting and a lively, political atmosphere.

Pania Roa, from Mana Otepoti was the MC for the event, and gave a solid left-wing perspective on opposition to the sales. There were speeches from Labour, OPSA (Otago Polytech Student Association), the Greens, Grey Power, and another from Labour then the Nurses Union.

There was an air of Nationalism in the mix, which was one of the concerns we discussed at the last ISO branch meeting. This was not that prevalent, but was voiced by the Greens, and Labour, talking about how money would be finding its way off shore, and that being a main concern: we, by contrast, see the capitalist motive towards profit and accumulation as being the problem - capitalists in New Zealand that will buy these shares will be just as ruthless as overseas investors. Although there was this nationalism, good points were still made. Labour obviously felt the need to tack left: David Parker gave a rousing speech, talking about families already struggling to pay the power bills, and the way that privatisation of our electricity companies will lead to higher prices. 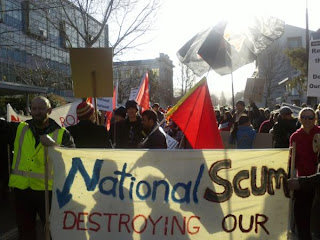 Glenda Alexander (NZNO) also gave a rousing speech, talking about the last time our assets were sold, and how the problems that came with privatisation were dealt with using extra privatisation, the time she was referring to being the privatisation of several hospitals. I commend Glenda for her speech, as she was also representing the interests of her fellow union members, as well as the people receiving health care.

It is good to see mass protest return to the streets of Otepoti/Dunedin.