Against the Capitalist Education System 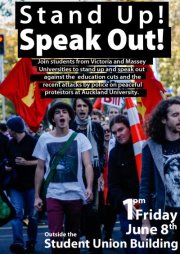 These are notes from a talk Rowan McArthur gave on behalf of the International Socialists at the Socialism 2012 conference in Wellington last weekend. Join the speak-out this Friday in solidarity with the activists arrested at the Auckland demonstrations - meet outside the Student Union at 1pm. The Tertiary Education Union Auckland University branch have put out a statement you can read here.


I'm relieved that I am here speaking on the subject of university and education in a capitalist system because two days ago I was so swamped with essays I wasn’t sure if I would be able to do it. I know I’m not the only one who feels overwhelmed by the workloads and expectations put on us at uni – and at the same time I think we are actually doing more but learning less than students 30 years ago. But more than this we now have to pay ever increasing amounts to be stressed out, get shittier education and if you are unlucky enough to be in an unprofitable department you may be half way through your degree just to be told your subject no longer exist. If it isn’t making money then is it really worth learning? This is the reality of the degree factory.

But even though students are already getting a raw deal it doesn’t end there. As you all know capitalism is once again in crisis and as per usual students all around the world are in the firing line. We are used as an excuse for the failings of capitalism; we are the ones putting a strain on the economy with our extortionate demands for a so called ‘affordable’ education. We are the ones who are failing to pay back our student loans in a ‘reasonable’ amount of time. We are greedy because we see education as a right not a privilege. But we students haven’t been taking this lying down. Inspired by the wider working class resistance in Greece, worldwide occupations, revolutions in the Middle East and the countless acts of resistance, students are also on the frontlines calling for revolution and real change. The past few years we have watched on as students march in mass protests against fee rises in the UK, have running streets battles with police in Chile and in the last few days we’ve seen massive protest in Montreal.

So what is the situation in Aotearoa? The Students here have seen similar neoliberal attacks on their education, there have been wind backs of many concessions won by students in previous decades. Prior to 1990, students paid minimal fees for education. The government set student fee was increased to NZ$1,300 in 1991, but in 1992 tertiary institutions were given the autonomy to set their own fees with no regulation. Since then, students have increasingly borne more of the cost towards public tertiary education in New Zealand, amounting to nothing short of the increased privatisation of our public tertiary education system. User-pays public education, and the notion that the student is a consumer and education a product, is the capitalist logic which comes about in crisis, leading to increasing personal debt. Last year university fees rose by 3.6% on top of the increases since 1990. The New Zealand Union of students association released a statement in April stating 15 per cent of the New Zealand university student population were suffering "absolute financial distress". That’s almost 70,000 students if you base it off the 2010 student numbers. In Dunedin the student trips to the food bank have increased massively, due to the ever increasing cost of living – rent has almost doubled in the past 10 years not to mention food. This financial oppression of Dunedin students, coupled with the atomisation and individualisation of students, is expressed often erratically, like at the Hyde street party this year where over a third of the student population turned out and flats were smashed up, including a caved in roof, in 2006 and 2007 Dunedin saw this expressed in the form of riots and battles with the police.  But this poverty isn’t ending after study - findings from a Ministry of Education survey released in 2011 showed that 39% of graduates did not earn any sum of money for at least one of the first four years after graduating. 11% did not earn any money at all during that four-year period. Overall, the proportion of young people who are not employed but are engaged in study has increased since the downturn. Youth engagement in study rose from 34.2% in 2009 to 36.4% in 2011. That’s an increase in the numbers of student which means increase in student poverty and an increase in private debt too.

The current budget isn’t making this any better. The Budget 2012 student support package is underpinned by the principle that students should make a greater contribution to their tertiary education – as quoted from a pro national website. Basically what the budget states is as a student you leave university with massive debt in a time of high youth and national unemployment and then have to pay more back if you do eventually get a job and if you don’t you get tracked by a high tech data system forcing you to pay. If you are unlucky enough to continue into postgrad you can get no living allowance increasing your debt even further.

We are the indebted generation!

So why is it so important that we fight against the current budget, fee rises and other attacks on students. There is a lot more at stake than us just not wanting to pay. Education is a right not a privilege. And with ever increasing university fees, an emphasis on profitable departments especially in the sciences, the current state of capitalism and pushes to pay back loans faster this right has been taken away for many people, epically from the working class and disenfranchised. This is precisely why we need to fight back. This is precisely why students are fighting back in all the major centres in Aotearoa. Last night we saw 43 out of 400 odd students arrested in protest against the budget in Auckland. Last year in response to OUSA calling students out to protest VSM over 500 turned up in 24 hours’ notice to harass John Key. The creation of student activist groups like WATU are an attempt to radicalise the campuses. Otago campus is yet to have a real student radicalisation but the overnight show of 500 people and the national student uprisings goes to shows the volatility of the campus.
Posted by International Socialists at 21:06