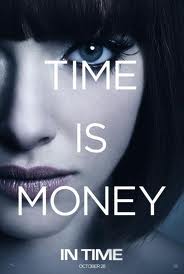 
When I first heard about In Time, my immediate reaction was “just another typical sci fi film, and Justin Timberlake? Hell no”. I could not have been more wrong. The premise of the film is simple – genetic engineering of humanity has meant that from your birth till your 25th birthday, you age normally. After that, you cease aging but a literal biological countdown clock begins ticking down, and when it reaches zero, you die. The only way to live longer is to earn more time; for most people this means selling their labour power. Time is a currency, same as any other, and when you run out – game over.


From the very first scene, this film does a fantastic job of portraying the hand-to-mouth struggle for survival that your standard low wage worker experiences every day. Every pay check has to stretch to cover the basics, and finding that little bit extra for special events is often impossible. A paycut or a price rise can literally be the difference between life and death for many people already struggling to stay afloat. All the characters are gritty and you feel for them, as their lives differ not much from our own. The cities are divided into zones, where those with vast fortunes live in opulence and comfort, while the working masses are forced to remain in slums and tenements. The wealthiest families dominate the political arena, using the riches they fleece directly off of the working classes.

It brutally portrays the parasitic nature of loan sharks and the credit system, and how invariably this serves to drag struggling people deeper into debt. Meanwhile, those who operate the loan schemes specifically target the poorest sectors of society to boost profits. 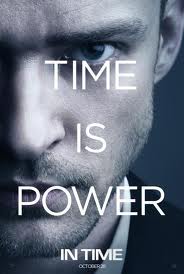 If it were only for the portrayal of the reality of class differences in society, this film could be considered unique among the “everything is fine” crap so often produced by Hollywood, but it takes it one step further. Through an unusual sequence of events, the main character finds himself in possession of a vast wealth of time, and is inspired by his father’s sense of right and wrong to use his newfound wealth to attempt to undermine the system which leaves so many in poverty while the few live lives of luxury. While he initially believes it is possible to beat the wealthy at their own game, he soon realizes that the game is rigged. Like so many people throughout real-world history, only one logical conclusion can be reached – “the system is not broken, it was made this way”. The only moral thing to do is to destroy it; bring it down completely and rebuild. Not content with simple bank robberies and the targeting of corrupt individuals, the main characters recognize that the very basis of their “economy” is an evil thing designed to keep the vast majority in poverty and conclude that the only moral position one can hold is one that is counter to the system of exploitation.


While the film does focus on the actions of empowered individuals to change things for the majority, it does not hold these individuals up as heroes. It also does portray the mass of working people as being unable to change things themselves due to the difficulties of merely surviving in a world designed to subjugate, but it presents this as an intended control mechanism, moderated by the wealthy elite to ensure their continued dominance. There are genuine criticisms to be made of these portrayals, and I won’t pretend the film is flawless.

It nonetheless does leave the inarguable impression that it is morally justifiable to take from the “haves” to provide for the “have nots”; that the redistribution of wealth is not only a good thing, but something which we should actively inspire to. Sure, In Time is full of car chases, gun fights, explosions, and a frankly unbelievable cop character whose motivations are never clear, but these merely cannot hide the fact that this film is a scathing attack on the current privileged economic system.


The timing of this film could not have been more poignant. With the Occupy Wall Street and associated movements highlighting the massive wealth disparity which has been created by capitalism, I do not doubt that this message will have been recognised by a great many working class people who might not have taken it seriously only a few years ago. The defenders of capitalism have long tried to tell us that there is pie in the sky, and if we just hold on a bit longer, they’ll drop some crumbs. In Time is a timely reminder that the pie was put in the sky by these same people, and that if we want to taste some we’re going to have to tear down the system that holds it there, and rebuild society to provide for us all.

Posted by International Socialists at 18:33