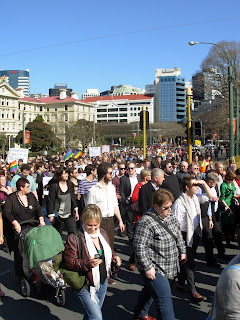 At least a thousand people showed out today to support a bill being introduced to parliament today, which would amend the Marriage Act to allow marriage between same sex couples. While many would argue that marriage is an institution best avoided, that doesn't change the fact that it is a right, with many associated legal benefits, denied to many couples simply because they are of the same gender. But there are no fundamental rights - only what we win in struggle. Equal marriage is the right to marry who you want. It matters in a million petty bureaucratic ways to the couples and it matters to everyone who is hates injustice. When bigots are beaten, everyone wins. 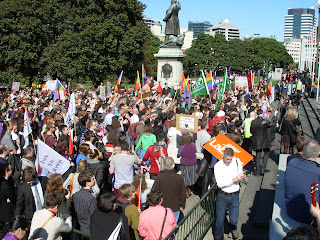 The thousand who turned out today was composed not only of those who are directly affected - queer individuals and couples - but also a great many straight supporters. The message was clear - you don't need to be queer to support equal rights, and this is borne out in every poll on the issue in NZ over the last few years. Marriage equality is but the first step in a long struggle for equal rights for queer individuals, but unlike 30 years ago, when the very right to legally exist had to be fought for, tooth and nail, today the pressure is on parliament to get with the times. But that's not to say there won't be resistance.

The social conservatives and the religious right would have us return to the days when it was illegal to be gay, and marriage was when a wife was a chattel sold by her father to the highest bidder. No way!

This bill needs to pass, and we need to build organisations which will not only ensure that Marriage Equality becomes a reality, but also be prepared to tackle not just the next struggle for queer rights but to fight, arm in arm, straight and queer, for equality for all. 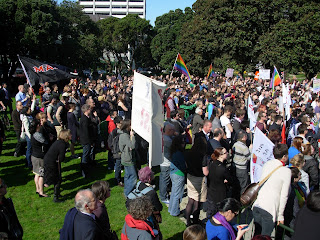 Posted by International Socialists at 02:20